Last year my youngest brother and I purchased a gift certificate as a gift for our father on Father’s Day.  It was a gift certificate to a shooting range, near his home.  Both of us wanted to learn how to use a gun, in some way it was a slightly selfish gift.  My father, a former police officer, said he would love to teach us, so it worked out perfectly for all of us.

My view on guns has been all over the spectrum.  I don’t want this post to be a debate on gun ownership, this is about something I’ve wanted to learn.  Why did I want to learn how to do this?  I often imagine myself in one of those Lifetime television dramas.  I’d be the woman fighting with the attacker, get my hands on the gun and not know what to do with it.  Was the safety on?  Is it loaded, how should I even hold it to shoot it?  With those questions running through my brain, I went to the range to get them all answered.

My dad thought it would be smart to begin with a small gun, a 22mm.  The gentleman behind the counter was friendly and knowledgeable.  He showed us the safety, explained how to load, how to tell if a bullet was in the chamber and how to walk with the gun to the designated shooting area.  Once there, the first thing that got my attention was the noise.  Even with the ear protection on, the pop of the guns made me jump each time.

We got to our lane, my dad set up my target, loaded a few and had me load the rest.  Then he showed me how to hold the gun and how to aim it.  I did exactly what he said.  When I squeezed the trigger, the power of that little .22 threw my hands up.  I realized I was going to have to get some control of myself if I was going to get close to hitting my target. 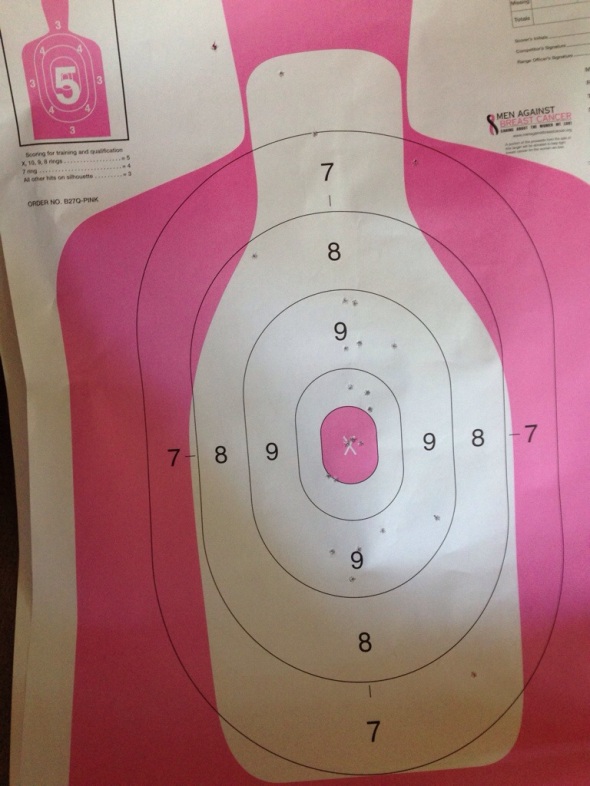 Once we had the .22 figured out we tried the gun my dad said he used the most as a police officer, the 9mm Glock.  I thought the .22 had kick, the Glock was like a punch in the stomach.  Every time I squeezed the trigger, the Glock jammed on me.  I gave the gun to my dad and with one hand, while talking to me, he hit the center of the target (did I mention he did this while talking to me, barely looking at the target), no jamming.  He explained to me I needed to grip the gun stronger.  I always felt I had pretty strong hands, guess not.  But now I know.  It’s one of those things that would have caused my death in my Lifetime movie fantasy.  Shooting the gun and it jamming and not able to figure out what to do to get it not to jam and the attacker is closing in on me. 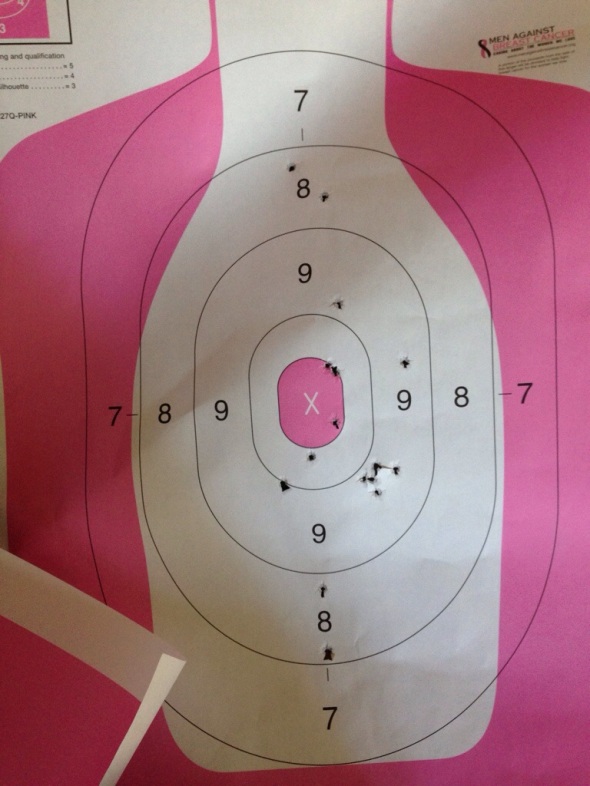 Again, all shots near the X are from my daddy. Notice the holes are a bit bigger from the Glock

I did get slightly injured.  My father called it Glock thumb.  It occurs when you have your thumb sitting too high and it gets hit by the chamber, after you pull the trigger.  Looks bad, it did hurt, but I survived.

Glock Thumb- This is my left hand.  I know it looks odd.

Natural Toner »
« How Many Steps Have You Taken?