When a PR Really Isn’t

Last year I ran Zooma 10k in Annapolis and loved it. It was a challenging and tough course, but I knew I could run it faster. This year when I got the email advising it was time to register I jumped on it. While I can honestly say I didn’t practice hill work like I needed to, I did get more long (6+ miles) runs in this time around. I decided earlier this year to follow the Jeff Galloway method of running. This method involves taking walk breaks often and early. Pretty much using intervals for your runs, 1 min run/1 min walk for example. Since I started using this method, I can honestly say I feel much better during and after my runs. I highly recommend it.

Like last year I arrived early, but instead of walking around, I found a spot and sat back and people watched.  Last year I stood and walked around and felt it when I started running. I was slightly concerned about my race time. At 6am, it was already almost 70 degrees. It was going to be a scorcher. One thing I do know, when it’s hot outside you need to slow it down some.  I decided to listen to my body and just relax.

I stretched as it got closer to start time, then we were off! I decided the night before to not vary my usual routine. Run/walk at a slow steady pace to start and then pick it up around the halfway point. I also decided not to drink at all water stations. The year before, there were water stations at just about every mile marker and I stopped at each and every one of them. When I run 6+ miles on my own, I only drink after the first 3 miles. At mile two I ran past the first water stop. When I hit mile 3, I was a little upset there was not a water stop, but decided I could make it to mile 4 (where I assumed there would be water). When I hit mile 4, no water.

Right around mile 4.5 or so the second water station appeared. It was at the bottom of a pretty tough incline. I walked through that stop, gulping and spilling 2 waters and made my way up the hill. At the top was the turnaround point. Last year this was mile 5, so I knew there was only about a mile left. I dug deep and made my way to the finish. As I finished I was handed my necklace, like last year, and I was directed to a line to pick up my swag. It was a long line, but moved pretty fast. There I was handed a water bottle and yoga mat.

If you look at the upper right hand corner of this pic, you will see my “swag” the yoga mat, water bottle (in white box) and lunch in the brown box. The wine was a nice bonus!!

Then I went over and picked up my meal. I was hot, dripping sweat, walking around with both hands full. I could have walked back to my car, then walk back to the finish area, but decided against it. Next year, I hope they give out the “swag” at the pick up.

I ran into some friends that had also completed the race and she was wearing a medal. I forgot all about the medal. When you signed up for the race they asked you this was your first 10k, half marathon or with you were aiming for a PR. Since this wasn’t my first, I decided to go for the PR, based off my results from the previous year. My friends pointed me in the direction of the medal line and off I went. Now this was a long line. It went out of the finisher’s area into the parking lot. But I got in there, started talking to people around me and did my best to help the time go by. After about what seemed liked 30 minutes in this line (about 80 degrees by this time too), an announcement was made. “The course was about .25 mile short, therefore no one PR’d and would if you are in line for the PR medal, you can go.” Well, that stirred up a minor riot, if you can imagine. After some back and forth, they finally said they would give medals to all those that signed up for the program (what they should have done). I finally got my medal!

My PR Medal, even though I didn’t officially PR.  According to my Nike running app I ran 6.24 miles.  When I finished I was quite impressed with myself, since I have a tendency to run quite a bit more then the actual official mileage.  You factor in the .25 miles and you see I still have not mastered running the tangents.

This experience was frustrating. I like organization and order. I like lots of water stops, tons of port-o-potties (even though I would rather explode then use one) and quick short lines. The Zooma folks were quick to respond to every complaint as best they could. Mistakes happen. I’m not giving up on this race. As a matter of fact, I will run Zooma Annapolis again and I plan on doing a race vacation so I can run another one.

While I was in line, talking to the people around me, a woman in front of me noticed my shirt and pointed it out to her friend, who turned around and told me she owned a gym called Badass Fitness. 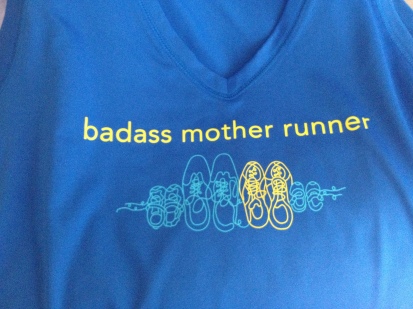 My Badass Shirt. I received many nods and smiles with this

The reason I mention this is because I fell in love with her tenacity and energy. Just watching her get a little (maybe a lot) irate about not getting her medal fired me up! I knew if she could pump me up while in line after running a race, she could probably push me to do anything! When I got home I did a quick google search for her company. Unfortunately for me, her gym is in Florida. Just from my brief interaction with her, I know she’s the type of trainer I’d need (someone who would kick my ass and make me smile). If you are in the Tallahassee area and in need of a push in your training, I highly recommend searching her out, tell her the Bass Ass Mother Runner from Annapolis said hi.

One thought on “When a PR Really Isn’t”