Yup, I completed my first official 10k. It took longer than I wanted and was a lot harder than I expected, but I did it. I decided to wait until the official pictures were posted before I wrote about it. I am happy I did. When I got home that afternoon I was feeling a little down (after the 3 hour nap on the couch). My pace was the slowest I had ever run anything, I made a lot of mistakes and despite me wanting to love my inner turtle, I couldn’t help but feel a bit defeated by it.  Fortunately, I did allow some time to pass and I was able to reflect on the entire thing with a bit more clarity.

The night before, I went out with my girlfriends/co-runners K and K. We called this night out our “Carbo Load” night. We went to a fantastic restaurant called Amiccis in Baltimore’s Little Italy area. We split The Pane’ Rotundo 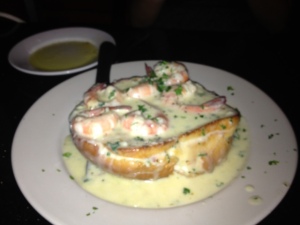 and then I completely devoured “The Donna”.

The Donna...getting hungry typing this

While this was my first 10k, my friend K1 has run many marathons. She even completed Pike’s Peak Marathon. K2 had just finished running the New York half and the Cherry Blossom 10miler. They spent the entire dinner doing what girlfriends do best, reassuring me and telling me some of their running issues and stories. After dinner, feeling completely carbo-loaded, we said our goodbyes until the following morning.

I didn’t sleep well, I think I was too excited and nervous. The race started at 9am. I was up and showered at 6. I ate my usual pre-run breakfast (MISTAKE #1) around 7:00a of a tablespoon of peanut butter a cup of coconut water. I decided to leave my fuel belt home (MISTAKE #2), I assumed there would be plenty of water stations during the race (MISTAKE #3). I did put 2 fuel packs in my pocket (MISTAKE #4), just in case. I left my house around 715 and parked @745 or so.  Once I met up with the girls, K2 gave us a quick tour of her workplace, Under Armour, and then we walked over to the start line. 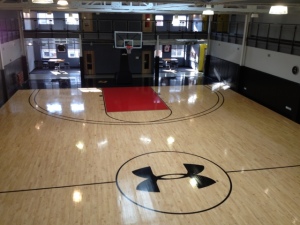 I still was feeling excited and nervous. After the anthem was sang and the announcer made some announcements we were off. My friends ran of with the fast people and I waited awhile and took off with what looked like my pace.

I noticed a few minutes in that I was running @10:30 min pace, faster than I had ever run anything. I promised my husband I would go slow (with my recent high blood pressure scare he was ready to hide my running shoes to keep me from running) and pay attention to my body. I slowed myself down and after the first mile, I made myself walk (MISTAKE #5). The day was much warmer than I had expected, I think it was @ 60 degrees at 9am. I was thirsty before we even started. Unfortunately, there were only 2 water stations.  At the 3.1 mile mark I wanted to pop one of my gels, but they fell out of my pocket at some point early in the race. By the time I got to the first water station, I felt as if I has sandpaper in my throat.  I grabbed 2 cups, stopped and guzzled both of them (MISTAKE #6). Anyone familiar what happens when you drink too much and then run? Well, cramps quickly followed.

Even with the lack of water stations and feeling off my game, I really enjoyed the race.  Throughout the entire time there was always someone clapping and cheering me along. Cars honked as I ran past and people screamed out their windows, “YOU CAN DO IT!” Whenever I passed a police officer stopping traffic for us I said thank you and their response was always, “Doing a great job!” “Keep it up!”. When I got close to the end, runners who had already completed began cheering me on. About .25 mile from the finish (I was walking) someone said to me, “It’s right around that corner. You want to finish running.” It was just what I needed to hear. I started running and ran across the finish line. YAY!!!!

Did I complete my 10 Things?

Lessons learned from this race:

The other day I was reading blogs and I came across My Victorious 1st Race Anniversary (I reblogged this too). It made me think. I ran my first 5k last June. At this time last year the thought I would even attempt a 10k sounded insane.  While my time wasn’t what I wanted and I think I walked more than I ran, I did it! No one, no thing, can take that from me. =)